skip to main | skip to sidebar

I've moved! Same blog, just a different address: http://anotherfalconryblog.blogspot.com/ More about all that on the new blog. Just getting re-started so the new blog is pretty bland at the moment but hopefully I'll post regular updates and make it look all spiffy as time goes on. See you there!
Posted by Isaac at 9:33 PM No comments:

Digging on the Dogs

I spent some time out in the field with America's premier terrierman over the weekend. There's a write up of our adventures over at Terrierman (an excellent blog if you've never checked it out...).
Posted by Isaac at 4:03 PM 6 comments:

Pheasant Hunt With My Boy

Its been a busy time getting ready for a move out East but I snuck out for a quick pheasant hunt with my Dad and son this past week. My Dad did a great write up of it over at the Upland Journal. I think this is going to be a favorite picture of mine for a long time to come! 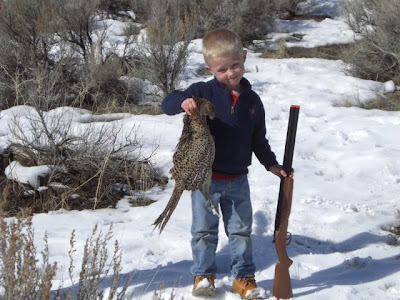 If you didn't take the time to read the write up, my son is 4 and that little gun is plastic with lights on the end of the barrel and a great shooting noise when you pull the trigger. We shot at that bird at the same time, so no telling who hit it...(although I'm pretty positive it was his) :-)
Posted by Isaac at 4:21 PM 2 comments:

The day finally arrived. I've got to get on with packing and moving and the weather report said that this week would be in the 50's so I took Goliath on one last hunt before turning him loose. He was already fat from being fed a bunch in anticipation of the release but in typical Goliath fashion he flew well regardless. He nailed the first starling of the day. We tried for doubles but none of the subsequent slips were quite ideal. He may have caught another had he been a bit lower but I was pretty happy with his performance given how fat he already was. I took him to a field near my home, fed him up until he wouldn't eat any more, cut the jesses off and sent him on his way. 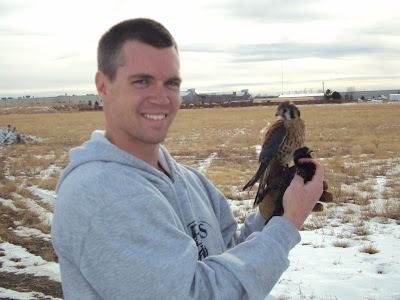 One or two more bites as a free bird: 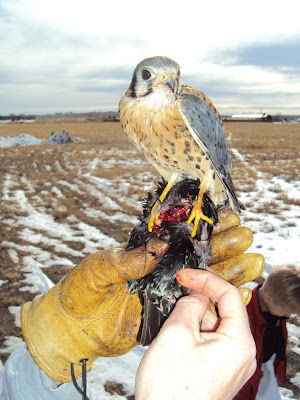 I was actually planning on taking a little video of the release but my camera batteries died right after these pictures! My friend tried to snap a few post-release photo's after he left my fist for the last time but he flew off when my friend approached. That's a good sign. He'll have no trouble out there and will make some female very happy come spring.
Thanks for the memories Goliath. You were a good one.
Chances are good that I won't be posting again on here until next season. There are some pretty big life changes coming up in the next few months and free time will be scarce but I'll be back eventually.
Thanks for reading, tune in next time...
Posted by Isaac at 2:38 PM 7 comments:

I had a bit of time off of work for the holidays so I spent a good deal of time letting Goliath do his thing.
On Christmas Eve we had the best flight of the year. I decided to swing through a high school parking lot where I'd chased some starlings last year. I hadn't hit the spot this year so I wasn't sure what I'd find but to my delight there were quite a few starling around. Unfortunately, none offered ideal slips but I was figuring a slip was a slip and I'd take whatever I saw.
There was an embankment on the far edge of the school about 20 yards back from the edge of the parking lot. The embankment itself was probably 10 feet high and there was a chain link fence at the top. There were probably a dozen starlings feeding on the far side of the fence and that perked Goliath's interest. They were barely visible from our vantage point. Then two popped through the bottom of the fence and I figured, "what the heck, we'll give it a go" not expecting much.

Goliath left the fist about 40 yards from the birds. I thought he was way too far away and the fact that he had to go up a hill to get to them meant he didn't stand a chance. As expected the starlings spotted him coming in from below when he was still a good 15 yards out and took to the air. The two that had been on our side of the fence popped straight up and Goliath poured on the speed snagging one right out of the air at the top of the fence!! I could hardly believe my eyes! What a flight! He had to gain at least 15 feet of elevation to catch that thing! I know that's not much for the bigger birds but pretty impressive for a kestrel!
On Christmas day we had another fantastic outing. We went 2/3 on slips and it was actually the one that he missed that was the best flight!

It was the first slip of the day, a group of starlings was hanging around a restaurant parking lot but they were about 30 yards out and down a small hill. Goliath could see them dropping off the wire but after they landed they couldn't be seen from where we were. I was trying to figure out how we could get a slip on them but a few flushed when I started toward them ready to throw Goliath so I retreated a little and put him back on the fist like normal. He bobbed a couple times and then took off towards the starlings even though we couldn't see them! He swerved down the hill and around a tree and a bunch of starlings busted where he went down. He'd missed, but what a cool flight!

The next flight was about 20 yards at some starling feeding on the edge of a dumpster. He plowed in to one right on the edge and tumbled into the dumpster with it! Luckily (unluckily?) it was a pretty full dumpster and all I had to do was reach over and pull him off the top. Starling one in the bag.

Now I'd never been successful at doubles until today but my buddy was supposed to come out with me earlier and had gotten caught up on the phone with relatives. Since he'd never seen Goliath take a starling and I kept catching them when he wasn't around I figured I owed it to him to try for another! We found a group near the same restaurant where I'd gotten the first missed slip and this time they were in a much better position. Goliath smacked one near the top of a small hill and they went tumbling down into some landscaping. I pulled them out and claimed my first double! 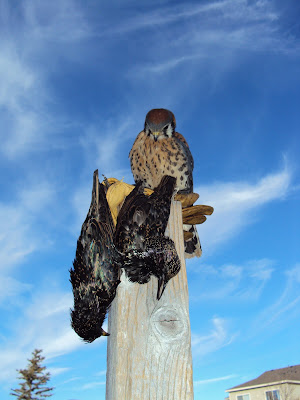 It had actually been a rough week as far as slips go. I was planning on putting buckets full in the freezer during my time off but on most days I only got one slip, if that. I did catch another starling in there somewhere but it was nothing incredible.
New Year's Day made up for it though! We had a big storm come through and things got cold. I got up and even though Goliath was a tad on the high side (92.5) I suspected that the cold would keep the starlings on the ground and we could get a few more slips then we'd been getting. Boy was I right!

I left the house at 9:03 and the first starling was in the bag by 9:09. It was a nifty little flight at some birds hanging out near a dumpster. They flushed before he got there but he snagged one out of the air at about the height of the dumpster. I love air catches!

I had a few more slips before we connected again. One miss was pretty cool in that he took a 40 yard flight at some birds we couldn't see behind a wall. We watched them drop from on top of a building and he just took off. It would've been even more cool had he caught one but he was awful close.
The next catch came near a doughnut shop. There were starlings EVERYWHERE. I don't think I've ever had that many starlings just hanging around. He had a couple misses there too but the starlings would literally land right beneath him after a miss. They were tempting fate and #2 collided with it as Goliath pounded him while he was snacking on some bread pilfered from a nearby dumpster.

I thought about calling it a day and fed Goliath quite a bit after that but as I was feeding him more starlings landed right in front of us! Can't argue with that! So I pulled the starling wing away and we went again.

It took a little bit of convincing to snag #3. Since he was already high when we left the house and he'd gotten some good tidbits after the first two, he balked on several that he usually would've hammered. #3 was just too good an opportunity though as it landed right in front of us and was busy gobbling up some dumpster goodies. Goliath smacked him so hard they rolled about 4 feet.

3 was as many as I could ask for though and better than I've ever done. I fed him up and we headed home. A fantastic way to start the new year! 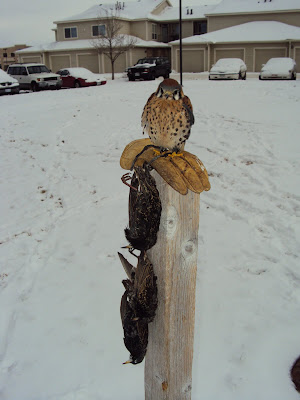 Alas, my time with Goliath looks to be short lived. I got news over the break that I will be starting a new job out of state in the middle of February. Its really too bad since Goliath is turning out to be a phenomenal bird but this change is for the better. I have a few more weeks and then I'll fatten him up and turn him loose. He'll do just fine on his own and he'll always be a bird to remember.
Posted by Isaac at 10:34 AM 2 comments:

Goliath snagged another sparrow over the weekend. Not much to write about, one slip, one bird. I thought I had the camera on the picture setting but ended up taking a little video instead. The subsequent pics I took didn't turn out too hot so I'll just include the video here:
Apparently a lady that feeds the sparrows (in a Walmart parking lot??) saw the catch and she was none too happy with our shenanigans. First time I've ever had a negative encounter! I know those types are out there but I've been lucky to avoid them thus far. She may think sparrows are cute but they can be nasty little critters that harm native bird populations. I wasn't going to argue though. She said it was "sickening to watch a bird prey on her sparrows", I said, "You know this happens every day in the wild, right?"
"I know, but it's sickening."
"Ummm...okay?"
And I left. She feeds "her" birds, I feed mine. This is how things work. :-P
Posted by Isaac at 8:24 AM 3 comments:

Back in the Swing of Things

Goliath flew like he was on fire at 90.2 grams. We had a few great off-the-fist chases at sparrows in hedge rows before he nailed this starling in a hospital parking lot: 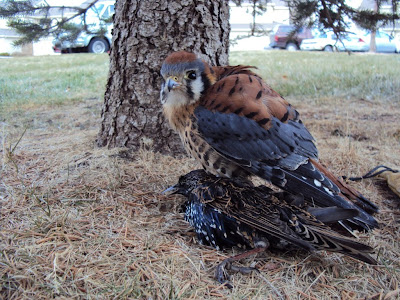 Now that man week is over, it's time to slay some starlings!
Posted by Isaac at 5:00 PM 3 comments: 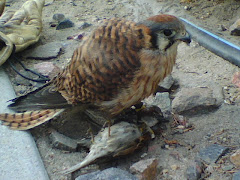 "The reward that comes from practicing falconry is, and has to be, a feeling of your own personal satisfaction; that, and that alone. Chances are no one else will be around when your hawk is at her best. Falconry is a tedious, time consuming effort with long periods of stress and anxiety punctuated by heartbeats of gut-wrenching visceral satisfaction so intense that is impossible to put into words."

Falconry/Outdoor Blogs w/o a Feed